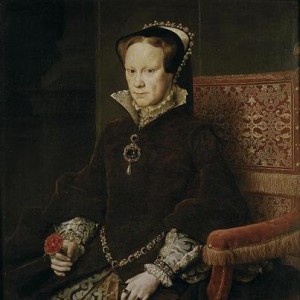 As I revise my historical romance, Fires of Destiny, I once again find myself pondering the difficult life of one of England’s Queens, Mary Tudor, aka Bloody Mary. Mary, daughter of King Henry VIII and his first wife, Catherine of Aragon, ruled England during the period explored in Fires of Destiny. She attempted to turn her people back to what she considered the “True Church” after Henry had dissolved the monasteries and appointed himself head of the English Church. My heroine, Alexandra, is a lady-in-waiting at Queen Mary’s court, while the man she loves, Roger Trevor, is helping Reformers (Protestant converts) escape the Queen’s wrath. “Bloody Mary’s” religious zeal included burning heretics at the stake, which made her quite unpopular with her subjects.

When Mary died in 1558, her younger sister Elizabeth came to the throne, beginning the Golden Age that produced such memorable artists as William Shakespeare.

Get the new 2013 edition of Fires of Destiny