The Iron Lady and the Mouseketeer 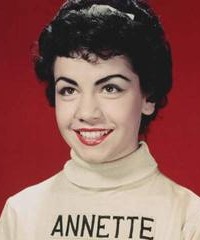 While the world takes note of the passing of the great Margaret Thatcher, I couldn’t help but feel a pang when I heard of today’s other celebrity death: Annette Funicello. She was only a few years older than I am, and the news of her passing transported me back to my childhood. I think many of the girls of my generation secretly wanted to be Annette. Growing up female in the 1950s, it would have been unusual to imagine oneself someday becoming President or Prime Minister. During my pre-teen years, around the time that I first encountered Annette on TV, I wanted to be what she was — an actress (never mind that I can’t act!). I envisioned myself singing and dancing and twirling a baton. I yearned to be cute and perky and outgoing, instead of tongue-tied and shy.

I am delighted, and very thankful, that young girls today can dream more ambitiously. Who knows, we might actually see a female President in my lifetime (go Hillary!). But even so, Annette’s death sends a wave of nostalgia through me as I remember life in the suburbs in the 50s, when we knew all our neighbors, ate our dinners as a family every night, and watched programs together on one of the *three* TV channels that existed.

Rest in Peace, Annette and Maggie — the girl who influenced my childhood and the woman who made her mark on the world.

I loved Annette in the Beach movies of the 60s and felt that same “pang” when I heard of her passing. Lovely post.

Thank you very much, Sandi! I appreciate your reading and commenting 🙂