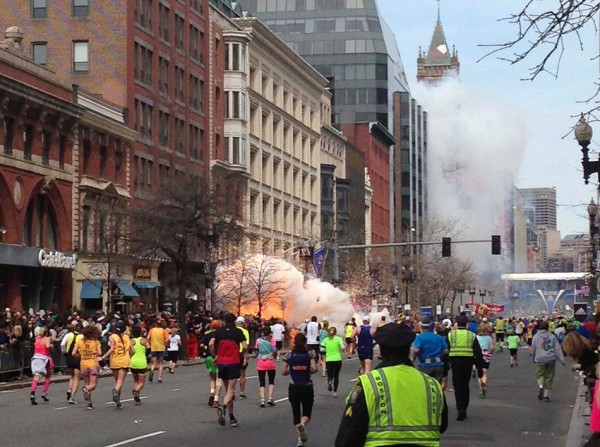 Boston is my city. I was born here. I’ve lived here for most of my life. I’ve never run the Boston Marathon, but I’ve been a spectator along the sidelines many times over the years, cheering the runners on, offering them water. I studied and taught at Boston College, the university on the peak of Heartbreak Hill. We would go out to Commonwealth Ave. from the front gate of the college to encourage the marathoners with the vow that it would be all downhill from here.

Never did I imagine the carnage at the finish line that we all witnessed yesterday. The finish of a grueling 26-mile race is always a place of joy, relief, celebration and personal accomplishment. It is not a place where darkness dwells. It is not a place of shattered bodies, torn limbs, blood, terror, and death. We must not allow the actions of terrorists, the pond scum of humanity, to change our perceptions of a tradition as old and as proud as the Boston Marathon.

One of my daughter’s close friends was running in the race yesterday. For several hours she was frantically trying to get information about him, but cell phones weren’t working and communication was poor. Finally, we learned that he was okay. He was about 1 km from finish line when the bombs went off. He couldn’t finish, but, like so many other runners, he was grateful to be alive and unhurt, especially when so many others were not as fortunate. 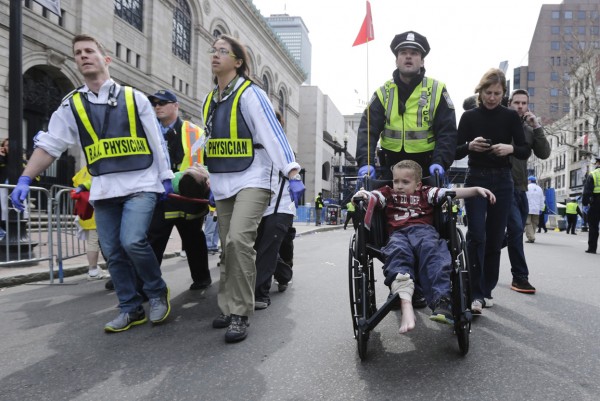 It is difficult to stop thinking about the images I saw yesterday; indeed, I had nightmares. But I was miles away from the scene and in no danger. My heart goes out to the victims, the witnesses, all the people who disregarded their own safety and rushed to help, especially the first responders in the medical tent who were called upon to do so much more than treat dehydration or blisters. And of course, kudos and appreciation to the medical personnel in Boston’s great hospitals who had to put their disaster plans into action on such short notice, performing procedures that are usually reserved for operating theaters in war zones.

But as we grieve for the dead and injured, we must not allow the perpetrators to accomplish their goal of frightening us into changing our fundamental way of life or forfeiting more of our freedoms. Clearly, some degree of additional security is necessary in a world that seems to be overrun with terrorists and/or malicious individuals who settle their grudges with guns and bombs. On the other hand, I don’t want to envision armed surveillance drones hovering over the heads of future Boston Marathon runners and spectators, ready to shoot down anybody whose skin is dark, who speaks with a foreign accent, or who was once treated for social anxiety, autism, or some other common mental health condition.

There will always be evil people seeking to cow us into submission. They must be met with courage as we stand up for freedom in the face of tyranny and nonviolence in the face of bloodletting.

As for future marathon runners, may they feel the wind at their heels and the pride in their hearts as they safely cross the finish line in the great city of Boston.