Dorothy Dunnett and Me, part 2 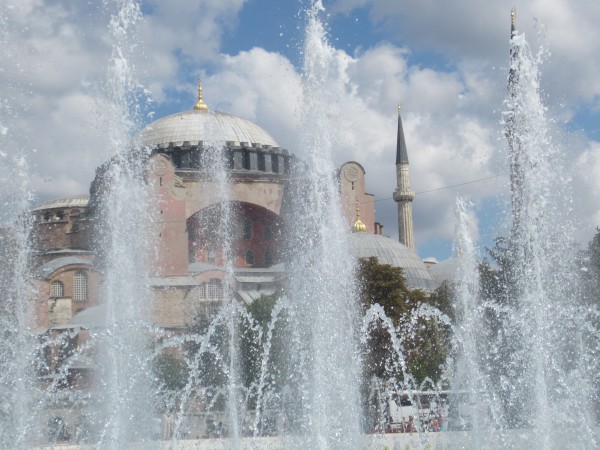 Magnificent St. Sophia in Istanbul, where dozens of Dunnett readers met in 2012 for The Dunnett Siege of Constaninople Convention. Photo by Linda Barlow. Click for larger image.

“Are you going to post that?” asks my editor, who also happens to be my spouse.
Uh-oh. “Yeah, I was planning to.”
“It rambles a bit.”
“I can tighten it up.”
“But what were you trying to say?”
These are not encouraging words to hear from one’s editor, particularly after only asking him to catch any typos. I didn’t expect a blistering critique. Oops. Back to the keyboard.

This happened early in the morning, when I was sleepy and a little unsure what I was trying to say. I had written a follow-up post to my last one “Dorothy Dunnett and Me,” in which I tried to detail some of the ways Dunnett had influenced my own writing. But the post focused mainly on the awesomeness of Francis Crawford of Lymond, Philippa Somerville and the vibrant 16th century world which they inhabit. 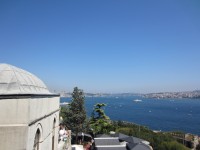 View of the Bosphorus from Topkapi Palace in Istanbul, where Philippa was an odalisque. Photo by Curt Monash. Click for larger image.

This happens often when one is talking about Dunnett: One forgets about everything else because one’s immersion in the rich, detailed, and bloody world she created is so strong. I can still see the Renaissance architecture, smell the earth and the sea, and hear the music, the laughter, and the incisive wit of her characters many years after I first discovered them.

What the hell, I decided, abandoning my “rambling” post. Since I obviously want to write about Dunnett, that’s what I’ll do. Forget the “how she influenced me” stuff. Although I would love to be able to compare my book (set in the same era) to Dunnett’s, that would be a bit like comparing oneself to Jane Austen—it’s a truth universally acknowledged that such a notion is laughable. My own books aren’t going to change anybody’s life in the manner that towering works of fiction can. My greatest hope is that I might change a reader’s afternoon.

Warning: there is spoilage here if you have not finished reading The Lymond Chronicles.

As I mentioned in my last post, I recently reread The Lymond Chronicles, Dunnett’s six-book series set in mid-16th century Scotland, England, France, Greece, Malta, Northern Africa, Russia and the Ottoman Empire. The books feature the incomparable Francis Crawford of Lymond, a true Renaissance man, and his child-bride, Philippa Somerville, who develops over the series from a defiant young girl into a truly remarkable woman. There is also a huge cast of memorable supporting characters, some of whom are quirky and lovable, some tragic, some foolish, some vile, and a few who are just plain evil.

When I first read the Lymond books decades ago, I had no one to discuss them with. Friends to whom I recommended the first novel, The Game of Kings, couldn’t get through it. Dunnett demands a great deal of her readers, and she does not make it easy, especially in the beginning, to follow along. 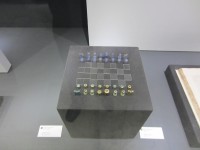 A chessboard in the Topkapi Harem — will Lymond ever be able to play chess again? Photo by Curt Monash, Click for larger image.

With the internet, though, came the joys of online book discussion groups, where I discovered that there were indeed other people enthralled by Dunnett’s cruel yet glorious world. Note: the Red Wedding was nothing to the Human Chess Game in Pawn in Frankincense. And although George R. R. Martin is fond of killing and maiming his characters, I don’t believe he has ever butchered a main character in such a manner that her skin is flayed, stuffed with straw and posed as if alive, then burned as a mercy by her lover when he, by the villain’s design, is brought face to face with her.

That lover is, of course, the hero, Francis Crawford of Lymond. In all of literature, there is no one quite like him.

And that’s one of the reasons why so many of us more pedestrian authors can’t really compete with Dunnett. No matter how much effort we put into developing our characters, and no matter how real they are to us (and mine are very real to me), they just can’t attain true Lymondosity.

Like Lymond, Roger Trevor, the hero of Fires of Destiny, has sailed the Mediterranean and had dealings with the Turkish empire. (This had a lot more to do with my own life in Turkey and my marriage to a Turk than with anything in Dunnett). While he’s intelligent and competent, Roger is nowhere near as versatile as Lymond, who excels at swordplay, archery, music, mathematics, wrestling, swimming, acting, disguise, acrobatics, roof-running, scaling vertical walls, trick horsemanship, seamanship, diplomacy, foreign languages, poetry, speechifying, leading smalls bands of men, leading armies, drinking everybody else under the table, and (of course) sex. Roger shines at some of these skills, but not to the point that he’s better than everybody else in Europe!

Lymond is also extremely good at suffering. Fortunately for us, the one thing he’s not adept at is suicide. Roger has his moments of anguish, but he never endures anything close to Francis Crawford’s soul-deep torment.

Then there is Philippa Somerville, daughter of the delightful Kate Somerville. When we first meet Philippa, she is a child of ten being interrogated by Lymond, who doesn’t trust her father. She naturally forms a bad opinion of this bully, and is resentful when her mom unaccountably makes friends with him. “Do learn tolerance, infant,” Kate says to her, exasperated. 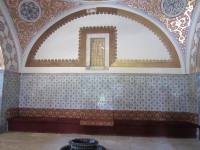 Latticed window in the Topkapi Palace Harem–was this where Philippa spied on the meeting in Sultan’s Divan? Photo by Curt Monash. Click for larger image.

Over the course of several books, Philippa learns tolerance and a great deal more. She is trained for the world stage by a subtle courtesan in an Ottoman harem, and she serves as a helper to Hurrem Sultan (Roxelana), Suleyman’s wife. (For more on my obsession with Hurrem and Suleyman, see my post on Muhtesem Yuzyil, the Turkish historical soap opera to which I am addicted).

Compelled into a marriage of convenience (“strictly on paper,”) with Lymond at the end of book 4, Philippa spends the next several years attempting to tidy up the confusion of her formidable husband’s heritage, while he focuses on obtaining an elusive divorce. Although they both do their utmost to preserve one another’s lives, they often act at cross-purposes. There are betrayals to expose, deadly secrets to unravel, and eventually, the love story that those of us with an instinct for these things had seen coming for thousands of pages.

And what a romance it is. The line from Romeo and Juliet, “For never was a story of more woe…” might be appropriate here. I can usually guess the outcomes of most plots, but even I couldn’t see how the exquisitely agonizing tangle that Francis and Philippa make of their love could ever resolve into a happy ending.

One of the more notable things about the series has been the endless discussion it has spawned among those of us who love Dunnett’s work. Get a bunch of us together, and it’s almost inevitable that certain conundrums will be debated (despite having been analyzed to death over the years). Just say, “Which child died, Lymond’s or Gabriel’s?” in a room full of Dunnett readers, and people will passionately range themselves on one side or the other. Or how about, “Which man made love to Oonagh in the tent?” Or “Should Sybilla have kept her promise, despite all the agony it caused?” Or even, “Philippa has the world on the palm of her hand…so why can’t she just get over herself?” 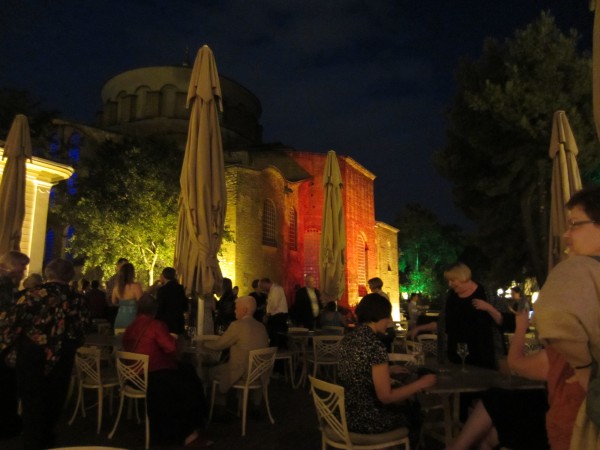 Dunnett Siege Convention: Gala Dinner In Topkapi Palace — Not usually permitted, but the Dunnett Group had special dispensation from the Sultan. Photo by Linda Barlow. Click for larger image.

Perhaps the thing I envy most about Dunnett (besides her brilliant prose) is the way she created a world so rich that people yearn to explore it over and over again. And that, I think, is the hallmark of wonderful writers: the ability to shape for their readers an appealing place populated by memorable characters, that can still lure readers into it long after they, the authors, have gone to dust.

Dorothy Dunnett and Me (part 1)

What beautiful, high, praise!
“Perhaps the thing I envy most about Dunnett (besides her brilliant prose) is the way she created a world so rich that people yearn to explore it over and over again. ”

Also, I find myself acting as editor for my husband frequently before he sends out emails. Sometimes, I wish I had someone to bounce things on.

I skipped the second part because I don’t want the series spoiled! You enticed me on your last post … and am looking forward to the adventure. Thanks, Linda!

I just finished the Lymond Chronicles- the first of what I know will be many reads! The void of no new Francis adventures is somwhat filled by reading the dedications of yourself and others who have known this brilliance way before I stumbled across it! (Thanks to the Dunnett fan here in Tasmania who shared Dorothy with me…) It really must be the best historical fiction ever written??

Yes, Jackie O’Toole, the Lymond Chronicles are the best historical fiction ever written.

Dunnett wrote the way Dumas WISHED he could write.