Dorothy Dunnett and Me

I am a passionate book-lover who reads across many genres, but my most beloved novels tend to be historical in setting, either straight historical fiction or well-written historical romance. I also enjoy historical fantasies.

I grew up obsessed with books by Anya Seton, Mary Renault, Thomas B. Costain, Jan Westcott, Margaret Mitchell, and the queen of all historical novelists, Dorothy Dunnett. Naturally when I began writing books myself, I wanted to write historicals.

I still re-read many of those old cherished books, but the author I return to most frequently is Dunnett, particularly her wonderful six-book series, The Lymond Chronicles. Has there ever been a hero to match the brilliant, edgy, mysterious and of course tormented Francis Crawford? Or a heroine more funny, clever, determined and very nearly tragic than Philippa Somerville?

Dunnett’s books are far more historical novels than historical romances, but Checkmate, the last one, seems to me to be the ultimate romance. Will the hero and heroine ever come to grips with their feelings for each other? And if they do, how will they overcome all the other obstacles keeping them apart?

If you haven’t read The Lymond Chronicles, you’re in for a treat. The Game of Kings, the first novel in the series can be tough going, though, as can the second. The author loves to be obscure and tricksy, and to throw in odd references and multi-lingual puns. But if you make it to the third book in the series, The Disorderly Knights, you’ll be hooked. 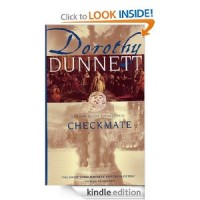 In my case I happened upon the fifth book first, became obsessed, and rushed to read the first four. I then had to wait a couple of nerve-wracking years for Checkmate, the sixth and final book in the series, to come out. It seemed appropriate that I found it in the same English language bookstore in Istanbul where I had first seen and grabbed book five, The Ringed Castle. Particularly since I was lured into reading the series by the first sentence of that novel, which began: “Not to every young girl is it given to enter the harem of the Sultan of Turkey and return to her homeland a virgin.” Given my own fascination with Turkey, this was irresistible.

Many years later, I was fortunate enough to have the chance to meet Dorothy, who was a truly warm and delightful lady. Although I had published books of my own by then, I was a total fangirl, and could hardly speak due to my nervousness, which she kindly ignored.

I didn’t realize how much my own work had been colored by Dunnett until a few months ago when I started revising my old 1986 historical romance, Fires of Destiny, for the 2013 edition. At first I focused on cleaning up what I considered to be a few messy sentences here and there. I used far too many dashes when I was writing that book, and there were also too many adverbs and adjectives. I made few changes to the novel’s characters, whom I invented when I was still a teenager and with whom I’ve lived with for decades (see previous post). I also didn’t tamper with the story, which seems to me to move along at a good pace and to be exciting and suspenseful.

Even so, I found all sorts of things to tighten up and change in my attempt to make the book better. But looking so closely at the text, something I have not done for many years, allowed me to see it from a different perspective: a little more detached than I had been while writing under stress during those busy years when I was trying to meet my publishing deadlines and raise my young daughter. Now with some distance, and having recently re-read The Lymond Chronicles, I could see Dunnett’s influence more clearly. I had learned a great deal from her novels, and, although I was writing an entirely different kind of book, she had inspired me.

Nice article! Wonderful you got to meet someone who inspired you so much!

Just completed the Lymond Chronicles a week ago and have already reread the last few chapters in awe! Lymond and Phillipa haunt my perimeters as if I have not just read a fiction but a true life tale of adventure, mystery, history, foreign intrigue, betrayal, danger, Ingenuity, humor, and love tried to the limits but fulfilled at last…

This is a whole different genre for me, Linda, but you’ve piqued my curiosity. Just to be sure, I think I’ll start with something other than the first or second … 😉

I’m glad I’m not the only one who started with The Ringed Castle. I read The Game of Kings last, to be honest, and I think that made it easier to fall in love with the writing style that had already evolved in Dunnett’s later bookts.

I first read them in the 70’s…I was scared to read Checkmate in case Lymond died! I still re-read them and they inspired me to travel to Malta, Rhodes, Venice and France…Istanbul and Russia are still on my list!